Fort Tryon Park is one of ten Scenic Landmarks in New York City. It is also listed on the National Register of Historic Places. It’s majestic viewsheds, architectural features, and world-class landscapes set it apart and have received international recognition. Learn more about the history and high caliber of the Olmsted Brothers design. 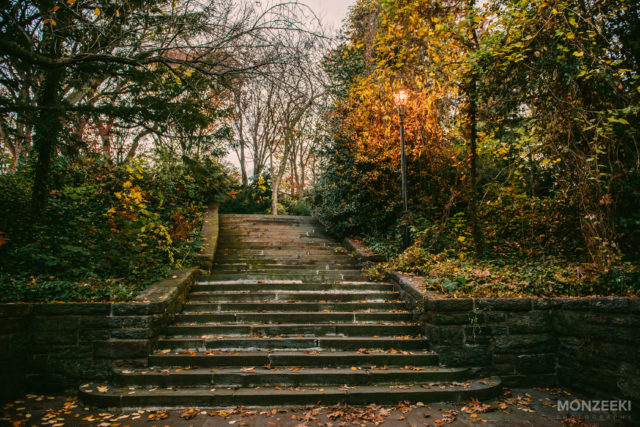 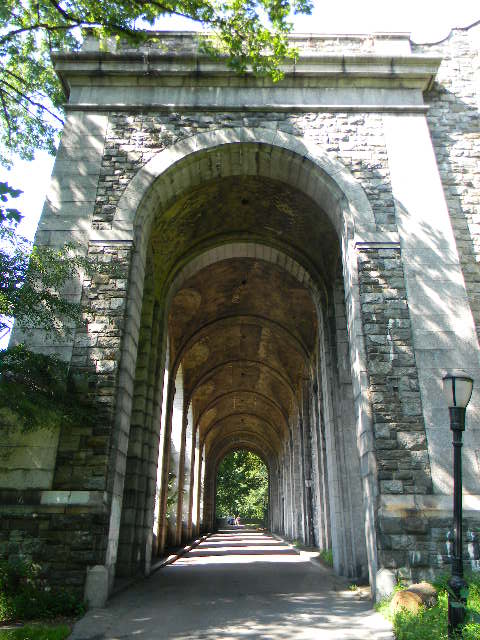 The area where the park is now was inhabited by Native Americans for centuries before it was colonized by white Europeans. The local Lenape tribe, the Wiechquaesgeck, called the area Chquaesgeck. They were described as living there in 1616 by the Dutch, who arrived and began attempting to drive them out; the land was finally taken by the Dutch in 1715. The earliest known Dutch name for the area was Lange Bergh (Long Hill).

During the Revolutionary War, the area was known as Mount Washington and was one of the battle sites along the Hudson River and part of the Battle of Fort Washington, a seminal Continental army defeat in the American Revolution fought in what is now Bennett Park. The British named the site after their major general, William Tryon (1729–1788), the last British governor of colonial New York City.  Soon after the war, the Americans re-appropriated the name, referring to the area as Fort Tryon.

Margaret Corbin Circle and Margaret Corbin Drive are named after a defender of northern Manhattan in the battle against the British troops. When Corbin’s husband, John Corbin, fell during battle, Margaret took control of her husband’s cannon. Her cannon was one of the last cannons to fire during the battle. She became the first woman to receive a military pension. In the early 1900s, a monument was erected in her honor: “On this hilltop stood Fort Tryon, the northern outwork of Fort Washington, its gallant defense against the Hessian troops by the Maryland and Virginia regiment 16-November-1776 was shared by Margaret Corbin, the first American woman to take a soldier’s part in the war for liberty.”

During the 19th century, wealthy New Yorkers built elegant estates around the area, the most notable being the house of Cornelius K. G. Billings, a wealthy industrialist, and horseman from Chicago. From 1901 to 1905, Billings reportedly spent more than $2 million building his mansion, Tryon Hall. In 1909, in honor of the Hudson Fulton Celebration, Billings funded a stele at the apex of the park memorializing Corbin and the Continental Army’s defense of the site. Remnants of the mansion can be found today on the balustrade wall of Billings Lawn, the beveled brick driveway, and majestic arcade.

In 1917, John D. Rockefeller, Jr. (1874–1960) bought the Billings mansion and hired the Olmsted Brothers architectural firm in 1927 to design and develop the property as a park. He also envisioned providing stunning views of the rock ridge from the future Fort Tryon Park. Prior to the development of the park, Rockefeller purchased the land on the New Jersey side of the Hudson – now known as the Palisades Interstate Park – to preserve Fort Tryon’s stunning views of the Palisades. Although the Billings mansion burned to the ground in the 1920s, Rockefeller incorporated the remaining structure into the park design. A small frame stucco gatehouse from the original property remained as well as the original estate walls, entrance arcade, and driveway. In 1935, Rockefeller presented the completed park as a gift to the City of New York.

Frederick Law Olmsted, Jr., (1870–1957) son of the co-designer of Central Park and Prospect Park, spent four years transforming Fort Tryon Park’s rocky topography and soil into a manicured landscape. Olmsted designed Fort Tryon Park with promenades, terraces, wooded slopes, and eight miles of pedestrian paths. He was careful to preserve open areas and his design included an abundance of colorful plants that formed a beautiful foreground to the expansive views of the Palisades and the Hudson River to the west. He noted in 1927 that this park had one of the few unspoiled river views in Manhattan.

The Met Cloisters opened in the north end of Fort Tryon Park in 1938 after Rockefeller bought sculptor George Grey Barnard’s (1863–1938) collection of medieval art. Inspired by Romanesque monasteries, the museum includes several cloisters, or courtyards, from actual European monasteries. Now a branch of the Metropolitan Museum of Art, it was designated an official New York City landmark in 1974.

After several decades of splendor, park maintenance declined precipitously during the fiscal crisis of the 1970s. Due to budget constraints in the city, Fort Tryon Park’s promenades, gardens, and landscapes fell into deep disrepair. Olmsted’s meticulous landscape plan was disregarded and the Heather Garden became a collection of overgrown shrubs and invasive trees. Even the views of the Hudson River were obstructed.

Preservation and Restoration: Becoming a Landmark

In 1983, Fort Tryon Park was designated an official NYC landmark, and a plan was developed the following year to fully restore the park as funding became available. The park’s Heather Garden was one of the first projects slated for renovation: designers extended bloom time and added plant varieties to create dramatic spring and summer displays, as well as captivating colors during the autumn season. The Greenacre Foundation funded the Landscape Restoration Plan that brought Fort Tryon Park back to life. Executed by NYC Parks and the landscape architectural firm Quennell Rothschild and Partners, working closely with horticulturist Timothy Steinhoff, the restoration adhered to the Olmsted Brothers’ 1935 plan, which still guides the work of the horticultural staff today.

The Heather Garden was reclaimed, as were long-lost views of the Hudson and the Palisades. The Fort Tryon Park Trust has continued to build on that initial restoration work, raising an endowment to help target and preserve capital improvements, organize programming that activates the park, and fund supplemental staff.

In 2009, prior to the Park’s 75th anniversary, the Fort Tryon Park Trust engaged public garden designers Lynden B. Miller and Ronda M. Brands to reinvigorate the planting design and develop a Framework Plan for enhancing and sustaining the Heather Garden for the long term. Miller and Brands built upon the unique horticultural, historic, and scenic assets of the Heather Garden while preserving the spirit of the original Olmsted Brothers plan. It was completed in 2014, fueled by NYC Parks gardeners and a $450,000 investment by the Fort Tryon Park Trust and its supporters.

In 2012, NYC Parks began designing a $900,000 restoration of Fort Tryon Park’s pathways, landscape, and staircase just south of the Billings Arcade to restore the western area of the park by Riverside Park, including the triple-arched driveway. The project, completed in 2015, improved park pathways, created new seating areas and enhanced public access to the historic Billings Arcade, a remnant from the Billings estate that Rockefeller incorporated into the park’s design. It includes significant evergreen plantings, as it is a segment of the more-than-one-mile horticultural trail through the park, the Winter Walk.

The Fort Tryon Park Trust wants to build on that investment and restore the arcade, which cost $250,000 to build when it was constructed in the early 1900s. Rockefeller, Jr. had the Olmsted Brothers incorporate the structure into the park so that it seamlessly fits into the scenic landscape. To get involved in the campaign to fully restore this historic treasure, contact us at [email protected] To read Christopher Gray’s article about the area, click here.

In 2015, the Fort Tryon Park Trust invested $350,000 in capital funding towards the reconstruction of the park’s Jacob K. Javits Playground. Coupled with $1.5 million from New York City Council Member Ydanis Rodriguez and $600,000 from Borough President Gale Brewer, funding upgraded this regional playground into an open space and recreational destination. The NYC Parks Landscape Architects’ design schematic was approved in September 2016 by Community Board 12, and in May 2017 by all NYC planning commissions and the playground was reopened in March 2020.

Hurricane Sandy swept through the park in 2015. Read here about recovery and restoration efforts in the park.

In 2017, the City Comptroller, Scott Stringer, allocated $1.3M for the reconstruction of the Grand Staircase. This project leveled all landings and stairs, and added new railings and lighting. The Grand Staircase connects the Broadway side of the park with The Met Cloisters museum. Work is projected was finished in spring 2018.

Through donor and membership support, Fort Tryon Park has received many updates and additions in recent years.

Updates to our play areas include $350,000 toward the $3.1M reconstruction of Javits Playground, an interim replacement slide for Javits Playground during the reconstruction period, and the Subway Terrace Ping Pong table restoration. We have also funded targeted programming at Fort Washington Terrace, such as Pop-Up Playtime and its accompanying seasonal Playground Associate.

The Trust has paid for improved signage and accessibility in the park with a custom-made West Side Highway sign (ultimately demolished in an accident), purchased a wheelchair-accessible ramp for the Linden Terrace for major park events, and paid for interpretive signage and decorative trash cans in the Cabrini Woods Nature Sanctuary section.

The Trust paid for the repair to the historic flagpole that was damaged in Hurricane Sandy and restored the park’s permanent public 1973 sculpture “Columnade.”

October 12, 2020 marked Fort Tryon Park’s 85th Anniversary Year and the Fort Tryon Park Trust has been focusing on restoring more sections of the 9 miles of deteriorating retaining walls that need shoring up (through our ongoing “Fortify the Fort” funding initiative) and inoculating the park’s 48 100+-year-old American elm trees (some of which predate the park) against Dutch elm disease. The protective impact of these projects will be significant. We hosted special anniversary programs and events online, including lectures, tours, community celebrations, and children’s nature art programs.

To address the overall health of the park, the Trust continues to fund NYC Parks’ staff overtime to paint, remove invasive plants, and do plumbing work. The Trust purchases supplemental vehicles and equipment when necessary (4×4 utility cart, pick-up truck, gardener tools, chainsaws, pole saws, sound equipment, blowers, snow throwers, and much more). The Trust supports thousands of hours of volunteer work in the park each year with funding for supplies, equipment, occasional overtime to NYC Parks’ staff, refreshments, and tools.

The Trust continues to activate the park year-round with over 300 free-to-the-public programs every year for people of all ages (concerts, movie nights, birding, horticulture, and geology tours, festivals, art and photography workshops, and fitness programs). We provide overtime to NYC Parks’ staff to set up, clean, execute, and break down public Fort Tryon Park Trust events and programs.

The Fort Tryon Park Trust dedicated $125,000 in funding to reclaim the Billings Arcade, the park’s oldest structure, and its surrounding landscapes. We hired a contractor to bring in equipment to remove invasive vines that have been threatening the structure’s integrity and choking trees. We funded new plantings to support the slope, as well as tools, equipment, and horticulture staff overtime to support an invasive plant removal volunteer crew that works on a weekly basis to protect and enhance investments the Fort Tryon Park Trust has made.

Hover over any year to read more about a Fort Tryon Park milestone!