At the turn of the century, when the Palisades were being blasted to rubble for construction traprock, civic outcries (including a federation of women’s groups) from New York and New Jersey stopped the quarrying. A substantial appropriation from both states, coupled with gifts of land from J. P. Morgan and John D. Rockefeller Jr., helped preserve much of the cliffs and waterfront in Bergen and Rockland Counties.

Landmark legislation by both states in 1900 laid the groundwork for a bistate commission that ultimately came to supervise Palisades Interstate Park, to which Morgan and Rockefeller also contributed.

With its 300-foot cliffs towering above the Hudson, the park is one of the most beautiful and spectacular in the region. In 1983, the Secretary of the Interior designated 13 miles of the Palisades – from Fort Lee north to Sparkill, N.Y. – a National Natural Landmark in recognition of its geological significance.

The word “Palisade” is derived from the same root as the word pale, ultimately from the Latin word palus, meaning stake. A “palisade” is, in general, a defensive fence or wall made up of wooden stakes or tree trunks. The Lenape called the cliffs “rocks that look like rows of trees”. 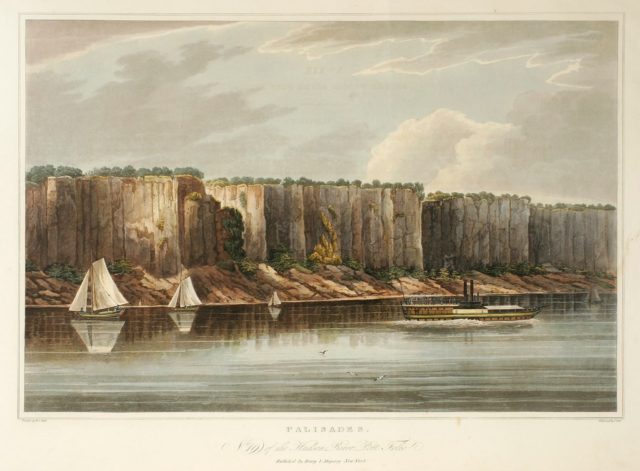 William Guy Wall traveled the length of the Hudson River to capture what is, in essence, a 19th-century “virtual reality” tour of the river. His large-scale images, engraved by John Hill, helped to inspire Americans’ enduring love affair with the river. This image of the Palisades includes wind-powered and steam-powered craft on the water, with the distinctive sheer rock faces looming above.