In 1917, Billings sold Tryon Hall and the surrounding land to John D. Rockefeller for $35,000 per acre. In 1925 Tryon Hall was destroyed by a fire. According to the New York Times the fire lasted well into the night. It was viewed by many area residents and people who were visiting the community.

The remains of this grand estate can still be seen today. These are the stone gates and gate house, the brick carriage road with archway, which is now a scenic overlook, connecting the property with the Henry Hudson Parkway. During the construction of Fort Tryon Park and The Met Cloisters the brick roadway of the Billings estate was paved over to protect the bricks from trucks coming into the park from the Henry Hudson Parkway. The paving was removed in recent years and is now now part of the pedestrian pathway of the park.

The former property, now incorporated into Fort Tryon Park, has become one of the most scenic wonders of New York City and the Hudson Valley. It is hoped that many will continue to appreciate the landscapes and views that Billings and Rockefeller loved and felt were so valuable. 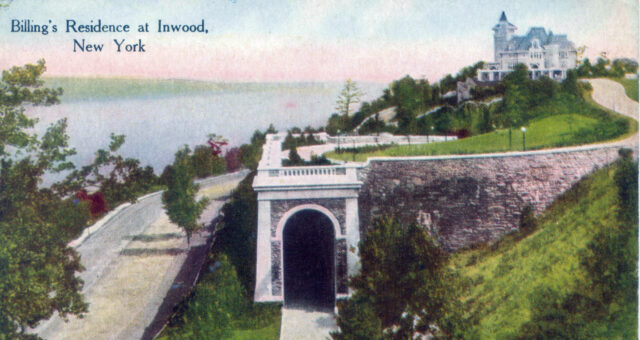