Fort Tryon Park was an ancillary site of the Battle of Fort Washington, where the Continental Army took a strategic position at the top of Long Hill (today’s Linden Terrace) but was overwhelmed by British and Hessian troops. During the battle, MARGARET CORBIN became the first woman to fight in a war, taking over her fallen husband’s cannon.

Margaret Cochran Corbin (1751-1800) was the first American woman to receive a military pension for her service during the Revolutionary War. When her husband, John Corbin, enlisted in the army to fight for the colonists, Margaret decided to go with him as a “camp follower” to cook, do laundry and nurse the wounded. On November 16, 1776, Corbin assisted her husband in operating a cannon during a Hessian attack on Fort Washington (today’s Fort Tryon). When John was fatally wounded, Margaret heroically took over his post and continued to fire at the enemy. Before the four-hour battle was through, she was severely wounded and nearly lost her left arm. In 1779, the Continental Congress awarded her a lifelong pension equivalent to half that of a male veteran. She died at age 49 and was buried in Highland Falls, NY, but in 1926, the Daughters of the American Revolution had her remains moved to the post cemetery at the U. S. Military Academy at West Point, where she is the only Revolutionary War soldier buried on the academy grounds. 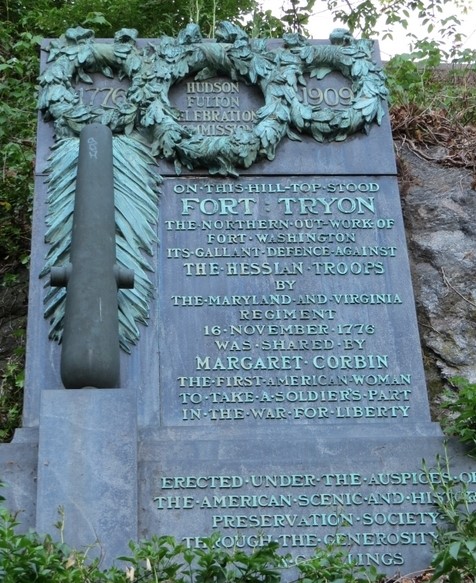