One of the original Olmsted Brothers design features of Fort Tryon Park, the Alpine Garden, on the park’s eastern expanse, was barely a memory as time and neglect had obscured its staircases and grotto, and the garden was long–buried beneath dense layers of overgrowth. During the years 2011-2016, NYC Parks’ gardeners uncovered the secrets of the garden while restoring it and revitalizing the Broadway side of the park.

When the Alpine Garden was constructed, it was the first of its kind to appear in a public park. Until then, alpine gardens appeared primarily on private estates in Europe and North America, but not in public parks. Alpine gardens are characterized by extensive use of rocks or stones and plants native to rocky or highland environments. Often they are designed to mimic natural outcrops. Because of harsh growing conditions, alpine plants are usually small, low growing, or creeping. Their diminutive form makes them desirable to landscape designers because they do not obscure the rocks and other elements of the alpine garden.

The genius in the Olmsted Brothers’ design for Fort Tryon Park’s Alpine Garden is their sublime realization of the potential for the steep, almost impenetrable rocky slope. They transformed the coarse terrain into a series of intriguing pathways and plantings that wander up and down the 150–foot slope between Broadway and The Met Cloisters. The Alpine Garden’s decorative rocks – walls, boulders, and stone borders — part of a complex human design, compliment the outcrops of metamorphic Manhattan schist, containing easily seen minerals such as quartz, feldspar, mica, and garnet. Some of the decorative stone used in the Alpine Garden came from rock excavated from the construction of the park and the nearby subway tunnel.

The Fort Tryon Park Trust raised money for several years to renovate the Broadway side of the park and the Alpine Garden. Historic photos and park construction drawings from 1933 from the Olmsted Brothers Archives guided the restoration approach. As part of the recent renovation of the Alpine Garden and the Broadway promenade, water service was restored, enabling horticulture and drinking fountains where there had been none since the 1950s! Renovations to the grotto water feature are being considered.

NYC Parks and the Fort Tryon Park Trust work with volunteers on the ongoing restoration of the Broadway landscape on the park perimeter and adjacent slopes. Over 30,000 volunteer hours have resulted in the planting of more than 45,000 plants, trees, and shrubs along the six-block eastern expanse of Fort Tryon Park, making a welcoming greeting for those coming to view the Alpine Garden. 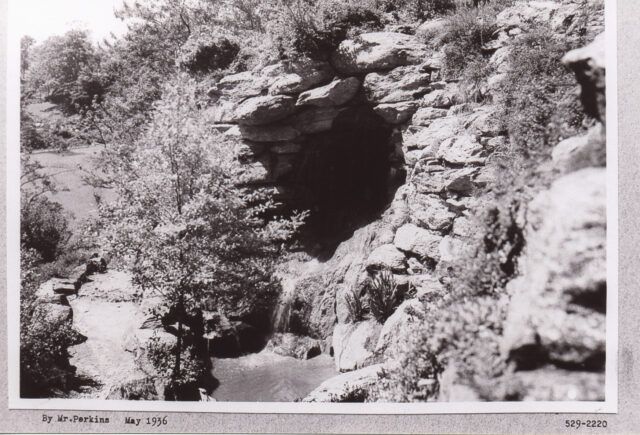